This post was originally written in July 2010. July, and warmer weather, will be hitting the Pacific Northwest soon, so I thought this post might inspire fellow hikers to plan their next long weekend campout in the Bull of the Woods.

Spending only three days in the Bull of the Woods Wilderness is not enough, and I recommend planning your trip for mid- to late July through late August.  There are plenty of swimming opportunities and ample wood to gather for camp fires.  Mid-July brought our hike tons of blooming rhododendrons along the Twin Lakes and Battle Creek Shelter sites.  We started our hike at the Elk Lake drive-in campground. We gathered wood, set up camp and took to sleep early.

If you start off here, you should beware of chipmunks, huge pot holes, and unpaved roads, large groups of campers, midnight chainsaw users, and large group fire pits with loud laughter bursts. You can find overnight parking here, but be sure to have a forestry pass in your window. 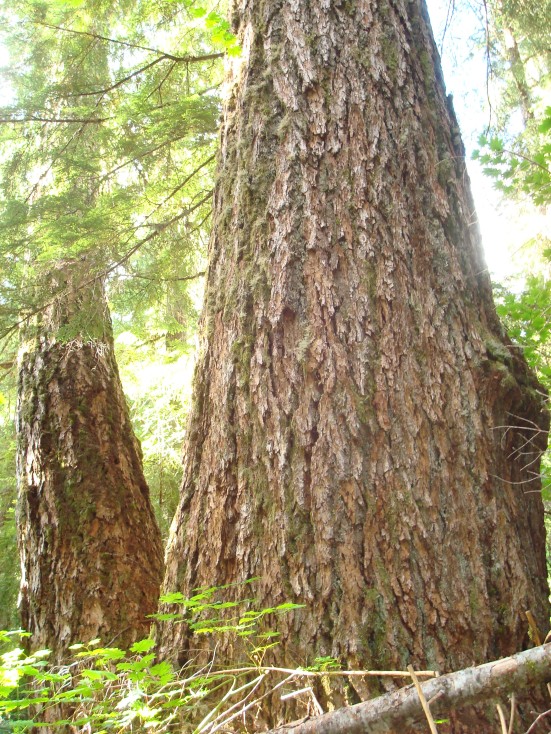 The Bull of the Woods contains one of the last stands of old growth in western Oregon, and is home to the northern spotted owl, but I didn’t see or hear any myself. The trails were a bit overgrown on the route we chose. That was a great sign because it meant that we would likely be alone out here tonight. We played in the river, relaxed in our hammocks, and built a huge fire to celebrate the 4th of July! No tourists, no overpriced souvenirs, and no chainsaw.

We hiked to two different sites on this weekend trip, but we both felt as if we should have hiked further each day.

Primary recreational activities in Bull of the Woods include camping, hiking, wildlife watching, and soaking in the hot springs. It is possible to see relics of the 19th century gold rush, such as deserted mine shafts and old mining equipment. Various trails lead to a fire lookout at the peak of Bull of the Woods Mountain, with fantastic views of the wilderness.

In early July there were hundreds of flowers, but my favorite was the fairy slipper, a kind of orchid. The sprouts of these flowers looked like little maroon asparagus shoots only standing a couple of inches off the ground.

The most exciting part about this hike was that it was also my first hike with a river crossing. It was very cold and slippery, but I had a good laugh getting across. Let’s just say I was happy to have the extra walking stick Cassie brought with her.

The Bull of the Woods Wilderness is a wilderness area located in the Mount Hood National Forest in the northwestern Cascades of Oregon, United States. It was created in 1984 and consists of 37,607 acres (15,219 ha) including prime low-elevation old growth forest, about a dozen lakes of at least 1-acre (4,000 m2) and many large creeks and streams. Adjacent areas, including Opal Creek Wilderness to the west, create a pristine area of nearly 84 square miles (218 km2). There are at least ten trailhead entrances and 60 miles (97 km) of trail. 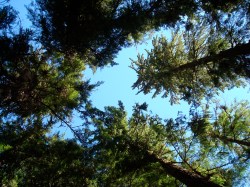 The name of the peak and thus the wilderness area comes from logging jargon in which the “bull of the woods” was the most experienced logging foreman in an operation.

An abandoned fire lookout stands at the top of Bull of the Woods Mountain, from which views of the Cascades and the surrounding territory can be seen. The mountain slopes are quite steep, with lower inclines ranging from 30 to 60 degrees and upper inclines from 60 to 90 degrees. The wilderness contains the headwaters of the Collawash, Breitenbush, and Little North Santiam rivers. 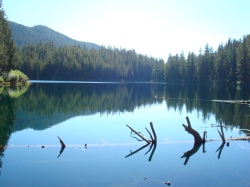 The forest consists almost solely of coniferous species such as Douglas Fir, Western Hemlock, and Western Red Cedar, but deciduous red alder is also prevalent along creeks. Pacific Yew is also common in certain parts of the wilderness and, of course, the rhododendrons can be seen blooming profusely throughout many areas from early June, well into July.

This was a very tranquil weekend.  No cars, no phones, no electricity, and the only running water was the ice-cold glacial river water.