In spring of 2009, my friend Cassie and I began our first overnight backcountry hiking experience.  We started our journey in Las Vegas, NV.

After a hearty dinner at an all-you-can-eat, old-town Vegas casino, we started our drive to Zion National Park in Springdale, UT. We stayed the night at the halfway point to our final destination.

We got an early start and made it to the park, but we had a bit of difficulty parking. Then we realized that we could leave the car parked on a side street out of the way. There are tour buses that shuttle from the nearest towns, and you can pay to leave your car. It’s definitely safe there: our car was completely unharmed, and it was even left unlocked. (Ooops!)

First stop in the park was the ranger station for backcountry permits and site selection. After choosing our sites for both nights we started our trek to Angel’s Landing.

Angel’s Landing is an incredibly steep climb and is packed with tourists during daylight hours. While many people tackle this stretch of trail with the wrong gear (flip flops, no water, jeans, bags, etc.), we may have had too much gear. Our packs weighed around 28 – 34 lbs to start. The extra weight on the initial ascent was difficult for us as novice backpackers, but of course we thought it all necessary for our two-night trip in the backcountry. Most of the weight was in food and water, so the packs were much lighter on the way out.

Angel’s Landing was breathtaking, but we were looking forward to the path less traveled: the West Rim Trail.  The West Rim Trail is a long trail with a steep climb to its flat plateau. The bright red wild flowers dazzled our eyes as we climbed. Some sections of this trail were covered with a thick layer of snowfall and loose rock, but it was well worth the climb for the views. 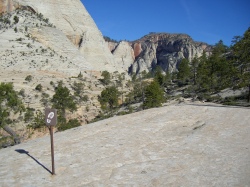 On the nights we stayed in the park, there was a warning about cougars in the area. It made me a bit nervous sleeping on the ground without a tent, but I didn’t catch a glimpse of any.

The next day we hiked five miles farther into the West Rim trail. Our last night in the park was spent in one of the prettiest sites yet. We stumbled upon a man-made stone sitting area overlooking the sunset side of the camp area. It was so relaxing.

We had to build a wind shelter for Cassie’s hammock so she could sleep without being rocked out of it. Fires were not allowed while we were there, so we went to sleep early and woke just before sunrise to begin our descent.

The descent was a breeze, being mostly downhill. By lunchtime we were eating at the closest diner we could find. I had the best cheeseburger, salad, and chocolate milkshake I’d ever had. I was pretty hungry by then and needed the nutrition.

We headed back to Vegas after lunch. We had a couple hours to kill before our flight home, so we went to the Tropicana Casino & Hotel for some frozen beverages by the pool. The weekend was pretty surreal at that point. We’d been in cougar country, fighting the wind, and without running water just a few hours before. Now we were sipping frozen drinks by the lagoon-style pool at the Tropicana. What an adventure!