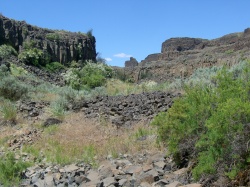 This inner region of Washington is dry and mostly desertlike, but there are some very strange land forms out here too: land forms that were made by millions of gallons of water.

So what happened here? Why was this place so dry now?

Geologists say they were formed due to massive floods brought on at the end of the last Ice Age, a series of  floods now known as the Missoula Floods. Each flood began as millions of gallons of water trapped behind a 40-mile-wide ice dam near Sandpoint, Idaho. As temperatures warmed in winter-to-spring season changes, the dam would burst, letting all the trapped water flood the Northwest. Scientists speculate there were over 40 of these floods within a span of 3,000 to 5,000 years before the ice sheets receded nearly 13,000 years ago. 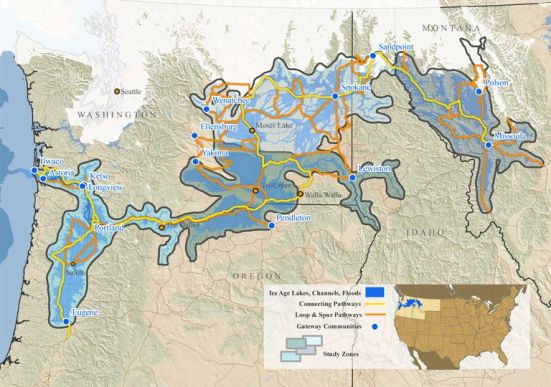 This area is now part of a vast network called the National Geologic Trail System and it is considered to be the location of the world’s largest floods.

All four states in the Northwest exhibit evidence of these powerful land changes. Imagine a 600-foot wall of water that would have crashed through the Columbia River Gorge. Idaho has 30-foot-tall ripple mounds on the ground were water would have passed through at a speeds upwards of 120 mph. The best example of these dramatic landscapes is only 5 hours away and has great camping options too.

Dry Falls State Park is what remains of the world’s largest waterfall created by the Ice Age Floods. The horseshoe-shaped falls would have been the biggest waterfall ever known with a flow rate of more water per second than all the world’s rivers combined today. 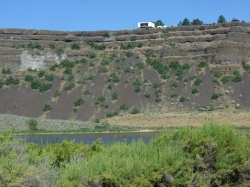 Last year I spent the weekend at this park to celebrate their annual Ice Age Flood Fest at the Visitor Center. This event was organized by State Park Ranger Maurya Broadsword. She was quite the hostess. The Visitor Center has a theater, store, and a great selection of ice age animal bones on display. We saw the Short-faced Bear skull, Jefferson Ground Sloth toe bones and several others.

My group stayed just a mile or two down the road at an RV rental place on the river. The rental owners were very nice people, but the trailers were really old and I found a ton of spiders throughout, including in my bed. Creepy! They were not worth the money, so I won’t even mention where they were.

I would recommend staying at the State Park camping area instead. They have RV lots and tent areas as well as boat and kayak rentals, a swimming area, and access to the river and all the trails from your site. The price was significantly lower, too. 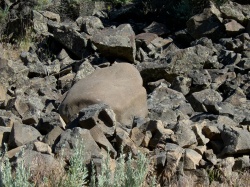 There were plenty of swimming and fishing sites, and tons of wildlife, but be careful of the poison oak along the trail edges. Something cool to watch out for is the unusually smooth boulder sitting among many jagged chunks of basalt. These are glacial erratics. Rocks and boulders were locked in huge chunks of glacier ice and rafted during the floods to their current resting places. This one likely traveled hundreds of miles to get here. Other great examples can be seen throughout the region, but you need to keep a sharp eye out for them.

If you have young readers, I do recommend picking up the graphic novel, Terra Tempo: Ice Age Floods, to read before you start your trip. It will help you and your child better understand the massive force of these floods in relation to many of the landscapes you see along your route from Portland to Coulee City, WA, home of Dry Falls.

This map not only gives you an idea of where Dry Falls (A) is, in proximity to Portland and Seattle, but Google Maps is also an amazing example of the flood’s destructive path that can still be seen from space. Check it out by clicking on the map.

Error: Twitter did not respond. Please wait a few minutes and refresh this page.