Missoula might just be one of the coolest little cities in the northwest region of the U.S. I have been there several times: once to work the SoBe booth at their county fair, once to sell children’s books for Craigmore Creations, and most recently as our midway stopping point on the long drive between Yellowstone N.P. (WY) and Portland (OR), our home. 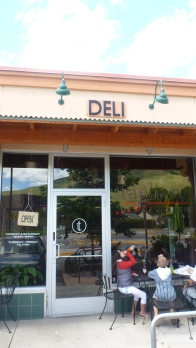 Todd had some business stops he wanted to make, so we were in Missoula for lunch. Our Yelp research turned up a local deli claiming to serve “typical New York deli style” sandwiches. Since I grew up eating New York deli, I had to know if they were really putting it on properly. Now, there are a few things you should know about New York style deli. First, it’s always made to order. Second, they don’t really do vegetarian foods unless you want a cheese sandwich.

We found the place, despite the hard-to-read window sign, thanks to the Yelper who pointed out that their marquis said “Deli”. There were a few outside tables and two tiny cafe-style tables inside. What shocked me was the empty floor space between the door and the deli counter. Never in N.Y.C. would you leave open space like that, but it left plenty of room for dozens of patrons to wait for their orders.

The menu was unique. Wooden signs hanging on the wall listed the sandwiches, all named after rock bands, like the Megadeth, The Cure, Doobie Brothers, Zeppelin, etc. On the opposite wall were some of the most Italian foods you can find: canned tomatoes, cookies, wine, biscotti, fresh pastas, and all were from Italian companies. So, if you want to make a real Italian dish, you’d better stop here to pick up your ingredients. Don’t forget to sample one of the cheese-and-ham stuffed pickled peppers in the glass case. WOW! They were amazingly reminiscent of the peppers from markets I visited in northern Italy.

Now, back to the sandwiches. Todd ordered the Megadeth and I decided on The Cure. We both ordered the 12-inch size sandwiches figuring they would make good road trip meals. The prices seemed a bit high, but for legit deli I would give it a shot. Then the sandwiches arrived. Being wrapped in meat packing paper made them look enormous, but they were indeed enormous! In fact, they were 12 inches long by 6 inches wide and loaded with meaty goodness. I can’t forget to mention that they gave me two whole, huge pickles with the sandwich. They happened to be the very best pickles I have ever had. Mild, not too dill-y, and so crunchy. Yummy, I’m getting hungry just thinking about this place again.

OK, now to discuss the “New York style”. I wouldn’t really say these were New York style subs or grinders. But yes, sir, much like a traditional Italian deli in New York it is. The bread they used for the sandwiches was tasty but a bit on the tough side. I would prefer it to be a little under-baked for softness but still very fresh.

All in all, this place is a bright star in the food world and probably the best sandwich spot in all of Montana. I only wish it was located here in Portland. Maybe someday they will open a second location. For now you will just have to go to 1433 South Higgins Avenue, Missoula, MT 59801 to get your Tagliare on.