Is Portland Oregon’s sister city of Austin really more weird than us? That’s the question I tried to answer for myself on my recent trip to Austin, Texas. I traveled to Austin on business, but I managed to get out of the conference headquarters a few times during the week. My mission was to see Austin alive with locals and to get a feel for why these two cities are always being compared.

Austin and Portland are similar in many ways: their abundant eateries and food carts, homelessness, and locals all seeming to be under 35 years old. Of course, the eclectic tourism options like the bat caves, the Austin city music scene, and their country fashions are what sets this city apart at first glance. The more time I spent in the downtown area, the more I realized how different it was. Maybe they really did have the weirdest city? A small touristy area in downtown was really the only happening place. Bar after bar lined this trap, guys standing outside each yelling for visitors to come inside. It made me uncomfortable and annoyed. Portland businesses never got pushy like this; why would they need to? 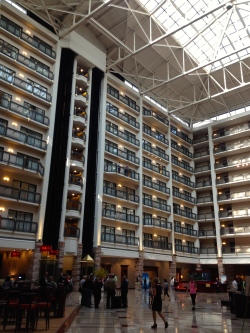 The conference I was working with was headquartered at the Renaissance Austin Garden Hotel. The main feature in this towering venue is a huge arboretum in the center. Balcony rooms overlook the spacious lobby and, in theory, natural light flows in through the glass roof. I had one of these rooms: the view was interesting, but it was actually pretty dark up there.

The sounds of late-night activities from guests at the bar below carried straight into my room and kept me awake on several occasions. Overall, the room was comfortable and upon arrival I had a tray of snacks specially created for me waiting with a welcome card. This was one of the features the hotel offers its conference attendees. My only complaint was that even after several days of the fresh fruit, nuts, and candy sitting out, the cleaning crew hadn’t noticed the abundance of fruit flies collecting in it.

In fact, the hotel was in a great location. Short hiking paths wound through the dense trees down to a small duck pond. There was a pool, although I never went in, and a pretty good fitness center with workout equipment of all kinds. That I did use. The hotel’s restaurant was OK, but there was no shortage of very good choices surrounding the hotel, easily accessible by walking. 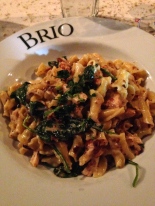 Brio Tuscan Grill was by far the most popular among our team. It’s an excellent Italian spot with rich hearty meals, fresh sauces and vegetables, and very good seafood. One night I had the Caesar salad, the tuna tartare, and the lobster bisque. On another visit there, I tried the bruschetta and the Campanelle Carbonara: pasta with grilled chicken, crisp bacon, Parmesan cheese, sautéed spinach and creamy Alfredo sauce. On another occasion I sampled the Calamari Fritto Misto, artichoke dip, and a few other items we all shared. I can’t recall a single thing being out-of-place at Brio. The service, wine selection, and desserts were outstanding, too.

For my first trip downtown, a small group of us wanted to grab dinner on one of the rooftop restaurants. We noticed a few cool spots and blues music seemed to come from every direction. We settled on a Mexican-inspired menu at Iron Cactus. Some of the menu items blew my mind. I guess you would call it real, gourmet Tex-Mex.

We started with the table-side guacamole. It was so fresh and very well done. For dinner, I had the Pollo Relleno: a tender breast of chicken stuffed with Iron Cactus cornbread and cheddar cheese, topped with their delicious jalapeño cream sauce and served with Mexican rice and garlic herb broccoli. It was indescribable.

The combination of the cornbread and jalapeño cream sauce was insanely good! One of the choices I had a hard time saying no to was ordered by another in our group. It was their stacked Pork Enchiladas, “a New Mexico style favorite,” says the menu: Pork Carnitas stacked on red corn tortillas and layered with Hatch green chiles, rajas, and Monterey Jack cheese, topped with homemade verde sauce and an over-easy egg. An over-easy egg, you say? Crazy! It looked delicious, and must have been, because it was gone in a matter of minutes.

That night we didn’t stay in town too long. We walked the streets a bit, listened to some of the authentic Austin sounds, and hopped from one bar to another for a little while before jumping back on the bus to return to conference headquarters. While roaming, I noticed a club with a bull-riding feature in the window, one with an L.E.D. American flag wall, and one rooftop featuring huge Jenga games with which beer guzzlers could entertain themselves. After only really glancing at these places briefly, I decided I’d find my way back another night so I could really get into it.

Lucky for me, I had family who lived in San Antonio, and they came up to join me at a restaurant near the conference called Eddie V’s Prime Seafood. It was fine dining at its best. We were seated right away and treated like kings. The entrees were simple and elegant. I’m a huge fan of ahi tuna and have tried it many different ways around the country. Eddie V’s might have been the best I’ve experienced thus far. Their ahi was prepared as a tartare tower mixed with curry and sesame oil. The plate was decorated with sliced avocado and mango, and spritzed with citrus. The flavors were brilliant. The fish was as fresh as it could get and the portion was perfect for a starter. As my finishing plate, I selected the Georges Bank Scallops sautéed with citrus fruit, roasted almonds, and brown butter. It was even better than it sounded. Huge scallops arranged in five points around the plate were beautiful to look at, juicy and tender, and the accompanying flavors of the brown butter, almond, and citrus left me feeling so satisfied. In most cases when someone I’m dining with offers me a taste of their dish, I usually say yes, but on this occasion I didn’t want anything but these scallops in my mouth. Just when I didn’t think anything could get better than that, we found another gem of a restaurant around the corner.

On a night when most staff were busy, the few of us left behind decided on another nearby hot spot, Truluck’s. Their website boasted their seafood offerings of Stone Crab, Maine Lobster and Dungeness Crab. They also showed off their many awards and accomplishments. While I’m often hesitant to believe these awards, this place may have deserved most of them. Their slogan was, “a getaway for the senses.” Was it? I’d say yes, but maybe not for the reasons you would expect a restaurant to claim this.

I called ahead and made a reservation for our group. Unfortunately, the restaurant was packed when we arrived, including several groups from our own conference, most of which had nowhere else to go. This would have been fine, but our reserved table was almost an hour behind because the guests just wouldn’t leave. We were all very hungry and tired from the 14-hour days behind us. We sat in the bar, listened to the piano player, and had wine and the Hot and Spicy Shrimp while we waited. When the manager Louis Saliba realized what was happening with our table, he began to push the tables out to free ours as quickly as possible. He kept checking in with us and was very attentive to our situation. 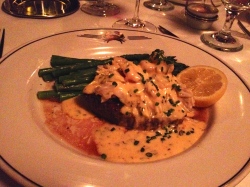 I was happy to finally be seated and ordering our food. The center-cut filet mignon adorned with jumbo lump crab and shrimp, with béarnaise sauce, was my choice for the evening. The sides I chose were mashed potato and sautéed green beans. Just after the food was delivered, the waitress was making rounds to gather additional drink orders, when suddenly my colleague seated alongside me noticed a huge brown bug. At first glance I thought, ROACH!! Ugh! If this was a roach, there were surely a lot more where that came from. When the waitress noticed it crawling along the table, she reached for it and it leaped into the air, jumping from one precarious table item to another and finally disappeared. Of course I squealed and the waitress explained it was grasshopper season and they were everywhere. I’m not exactly sure if they are better than roaches, but we weren’t going to let that stop us. So, while the food, service, and Mr. Hopper’s visit may be “a getaway for the senses,” I’m not entirely sure that was their hope for living up to their slogan.

Although the  trip was heavily focused on food, you probably want to hear more about my night out on the town, right? It was our last night at the conference and although I’d had very little sleep while there, I was ready for something to happen. Three of us decided we wanted that night on the Austin streets to become a reality. After dinner, we jumped into a cab and landed ourselves in the heart of  the action. The streets were filled with people already: very young girls wearing little-to-nothing, and everyone well on their way to being drunk.

We started slowly at the rooftop bar with the giant Jenga games and live music. After a drink there, it was onto the next one, a dance club with thumping disco techno music, cheap hard liquor and bachelorette parties rolling up in short shorts, huge heels and slutty outfits. After this, we set out to find more live music, but had to stop at the Bull for a ride first. We all rode like amateurs, but had a lot of fun making asses of ourselves. Then there was the L.E.D. American flag wall and a great Texas cover band to play any song we requested. We danced for them until they would play no more. Once the band was gone, the wall dancers arrived. Just check out the pictures, you’ll see. 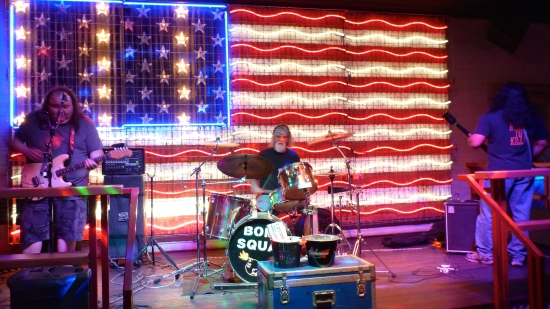 All in all, the evening was outrageous. The bars closed and thousands of young, drunk patrons were tossed into the streets. The roads were closed to traffic and cops watched as it all went down. This was no “Last Thursday”, this was a Friday, Saturday, every week thing. We shared some late-night grub at the pulled pork food cart before hopping in the cab back to the hotel. It was just what I was hoping for: great people watching, live Austin music, and some extreme bar-hopping all in 10 blocks of a city that proved to be nothing like what I know of my home town. 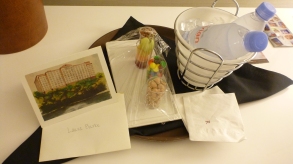 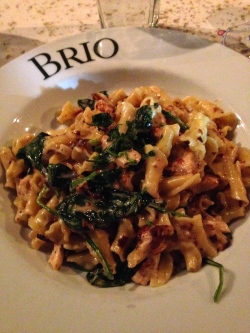 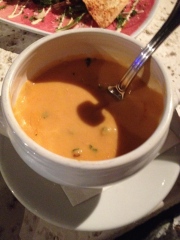 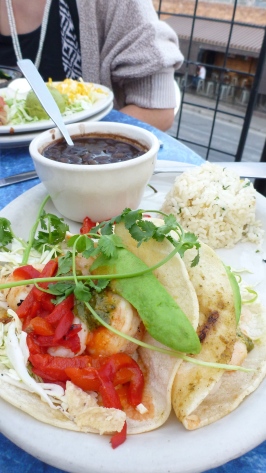 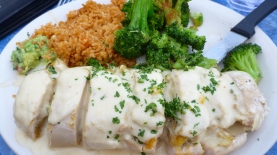 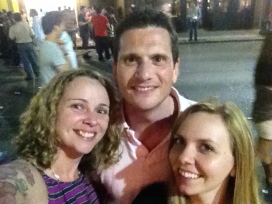 One thought on “Austin, Texas: Weird, Eclectic, and Yummy”